There are no events to display
Laurel Class

Congratulations to the GCA Senior Cheer captains, who were honored with the opportunity to try out in the spring of 2020 for the Universal Cheerleading Association Staff!

Congratulations to GCA Seniors and Cheerleading Team Captains for the 2019-20 school year, Raegan Farley and Carli Dockery, for the honor of being asked to try out for the UCA Staff at the conclusion of camp!  This prestigious offer is only extended to the most talented seniors, and it's a privilege to have this opportunity.

The Universal Cheerleading Association hosts multiple summer camps, cheerleading competitions, and much more each year.  They depend heavily on UCA staff members to lead, coach, and train the younger cheerleaders and teams who attend.

GCA Varsity and Middle School Cheerleading teams competed and received top awards at the UCA Camp held at the University of Tennessee this summer!

Congratulations to the GCA Cheerleaders!  Both the Varsity and Middle School teams are attended the Universal Cheerleaders Camp at the University of Tennessee.  Both teams were excited and honored to be awarded superior blue ribbons at their cheer evaluations. 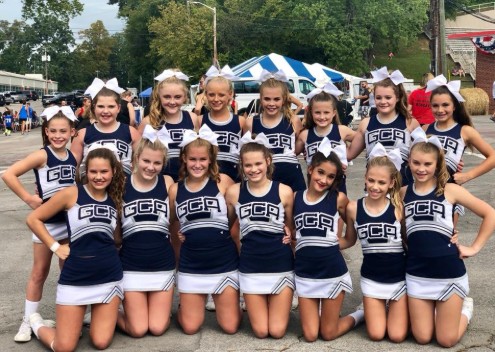 The Grace Christian Academy Middle School Cheer team competed again this year at the Tennessee Valley Fair on Saturday, September 9, 2018.  The girls have worked on this two and a half minute routine since April and left the mat with zero deductions and performed beautifully.  The routine consists of standing tumbling, running tumbling, individual stunt groups, a cheer, a pyramid, and jumps.

We're so proud of this team for their hard work and diligence in preparation for this competition!